The most important scale used in pop, jazz, country, rock, and classical music today is a 7-note scale called the diatonic major scale. This section describes the diatonic scale and other musical concepts associated with it, including modes, chords, and intervals.

The second most important scale is the natural minor scale. This scale is derived from the diatonic major scale and shares the same notes and chords.

In modern western music the diatonic scale pattern is the basis for fifteen major keys. Each of these keys begins on a different note. The note that begins a key becomes the name of that key.

The key of C major is an example of one such key. When we start playing a diatonic scale pattern beginning with C, the result is C, D, E, F, G, A, B and C. When we repeat the beginning note of the scale we have played an octave. An octave is the tonal distance between two notes with the frequency of the higher note being twice that of the lower.

In the above example the scale begins and ends on C. If we wanted, we could repeat the sequence of tones to higher or lower octaves. The tones that make up the octave have been given letter names (A, B, C, D, etc.). Sometimes a single tone is called by two different names, i.e., C# and Db, D# and Eb (see Enharmonics).

The diatonic scales is just one of many scales used in music today. It is popular because the intervals between the notes is pleasant to our ears North American ears. Though there may be some scientific reason why this one is so popular, it is probably because we are used to hearing it.

Other cultures around the world have developed other scales that sound good to them by altering the intervals between the notes. The different spacing between the notes of the chromatic scale is what makes Mid-Eastern, Indian, and Chinese music sound different from most of our pop music.

Types of Scales
As mentioned above the diatonic scale (also known as the Major scale) has a particular sound that distinguishes it from other scales. The two most important characteristics that gives this scale its unique sound are the third and seventh note. The third note is two full steps away from the root. This is an interval called a major 3rd. Scales with this interval tend to sound bright and strong. Scales with the third note only a step and a half apart, that is, a minor 3rd interval tend to sound soft and moody.

The second characteristic of the Major scale that sets it apart is that the seventh note of the scale is a half step away from the octave. This distance creates a tension that is quickly dissipated when the root note follows the seventh note in a melodic run. The quality gives the scale a grounded quality to its sound. Other scales that have the seventh note further away, that is, a larger interval distance, sound airy and indefinite.

Below are examples of a few of the many scales from around the world. They all have different sounds depending on the distances between the notes. 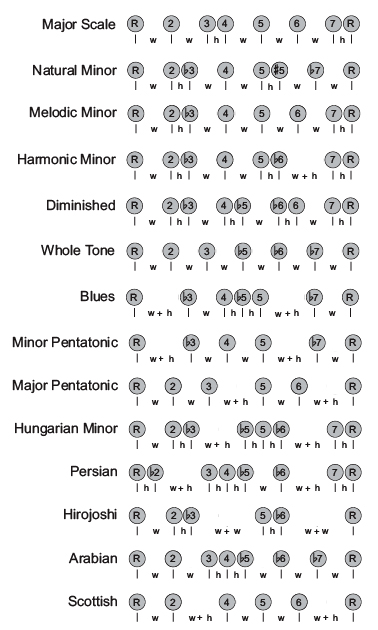