Scale degree refers to a note's position in a scale: 2nd, 4th, 5th, etc. When extended degrees are added to a chord, the chord takes on the name of the highest degree. For instance, Cmaj9 has a 9th in it. G13 (Gdom13) has a 13th in it, and so forth. 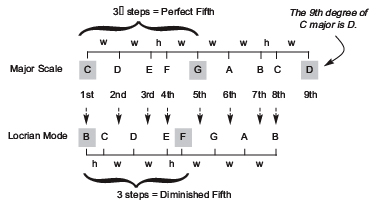 Scale degree also indicates the interval or tonal distance from the beginning note of that scale. For example, the tonal distance from C to G is 3-1/2 steps. In the above diagram, we see that in the key of C major the fifth note is G. This interval is called a perfect 5th (often just called a fifth).

In the B Locrian mode, the distance between the first note and the fifth note (F) is 3 steps. The interval between B and F is a half step less than a perfect 5th. Using the scale degrees of the major scale to measure this distance, we call this shorter interval a diminished 5th. The scale degree and spacing of notes in the diatonic major scale is the "yardstick" by which intervals in other scales and modes are measured.

Altered Chords
Occasionally, you may see a chord written G13b9 or G11#9. Chords like these have flatted or sharped one or more of the notes of the naturally occurring scale degree. Whenever a note of a chord is changed and the change results in a note that does not belong to the scale from which the chord is derived, the chord is said to be altered. 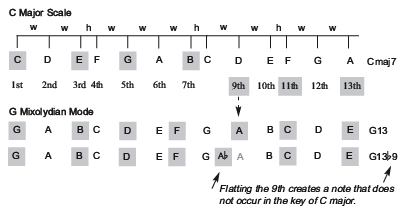 Because altered chords use notes outside the diatonic scale they often produce a dissonant sound. These chords are used to create a feeling of tension in a song. The chord that follows an altered chord usually relieves the tension.