A mode is a new scale derived from the notes of another scale. A mode begins and ends on a note that belongs to the original scale and has all the same notes as the scale from which it is derived. The difference is simply the beginning note. Modes have been given names depending on what note of the original scale the mode begins on. The names come from locales around ancient Greece. The first mode which begins on the first note of the scale and is called Ionian (this is identical to the Major scale). The Dorian mode begins on the second note, and so on.

Although these modes share the same notes as the scale from which they are derived, when played they have subtly different sounds. Soloists often base their improvisations on modes, and change from one mode to another as the chords change in a song. 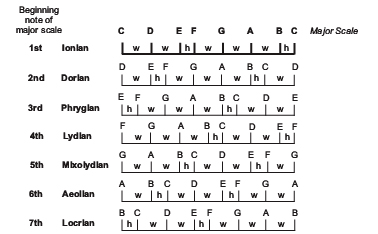 The Natural Minor Scale
Within the major scale is a mode that is so popular that it has risen to the status of a full fledged scale. The sixth mode of the major scale is the Aeolian mode but it is better know as the Natural Minor Scale. This is the most common of all the minor scales and is used in every aspect of Western music (that is music of western culture not as in country-western).

The Natural Minor scale is actually the same as the Aeolian Mode. They share the same notes as the Major scale from which they are derived.