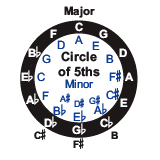 At the bottom of the circle of fifths diagram are some key names arcing around the inner and outer ring. These are enharmonic keys sharing the identical tone. For instance, the key of Cb has seven flats while the key of B has five sharps. Yet, since they refer to the same note, they are tonally equivalent.

The descending fifth and the ascending fourth intervals produce a strong resolving chordal movement. This movement is at the heart of many chord progressions. For instance, the I, IV, V, I chord progression in the key of C major produces C, F, G and C. As already shown, the movement going counter-clockwise resolves at F. Similarly, the V chord (G) resolves back to the tonic C.

In the circle of fifths diagram you might have noticed that the relative minor of F is D. In the chord substitution section of the Harmonizer, we can see that the chord of Dm can substitute for F major. When we make the change, our I, IV, V, I progression turns into a I, IIm, V, I progression: C, Dm, G and C.

You might now notice that on the outer ring of the circle of fifths diagram we can read (going counterclockwise) the same root notes of the IIm, V progression finishing with the I chord (G, D, C). In fact, it goes beyond that. You can see that the very popular IIIm, VIm, IIm, V7, I progression is derived from the circle of fifths as well. In C major that progression would be Em, Am, Dm, Gdom7, C.

The Turnaround
The IIm-V7 (often called two-five) combination of chords is called a turnaround and is frequently used in jazz. Any two consecutive roots on the wheel moving counter-clockwise produce a IIm-V7 turnaround combination.

The combination is often played the end of a musical phrase because it Òturns aroundÓ the chord progression and starts it over again. A turnaround usually leads to the tonic chord. In the key of C major, the turnaround would be Dm (IIm), Gdom7 (V7), C (I). You will notice that if we begin on the D on the outer ring of the circle and move counter-clockwise, we encounter the G and the C in the same order as played to create a turnaround. 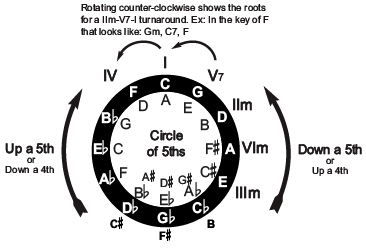 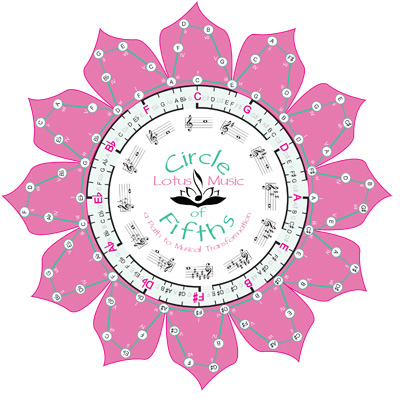 Learn about the Lotus Music Circle of Fifths