A chord can be any number (greater than one) of notes played simultaneously. The basic chord is the three-note triad. It normally consists of a root note and the third and fifth note of the mode or scale that it is derived from (see Scales). However, other notes are often added to the basic triad to create more interesting harmonies.

Many chords consist of four notes with the forth note being the seventh note of the scale or mode. Chords that have this seventh note included are called seventh chords. Seventh chords are written like this: Cmaj7, Dm7, G7 (Gdom7). 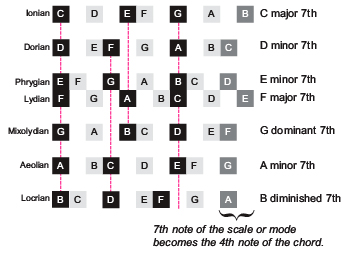 Sometimes, the sixth note of the scale will be added instead of the seventh. As you might guess, this chord is called a sixth chord, i.e., C6, Fm6. 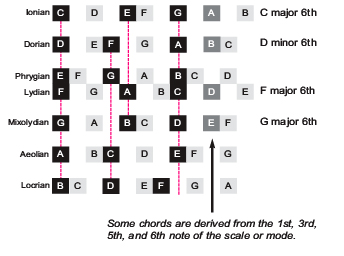 The addition of the 7th note of a scale to a triad chord adds more complexity to the harmony of a piece of music. These four-note chords are very important to jazz and rock.

The addition of the 7th note of the scale to the chord derived from the fifth mode creates one of the most special chords in Western music. This four-note chord that is derived from the Mixolydian mode is called a dominant 7th chord. This chord is essential to the sound of jazz, rock, and blues.

The dominant 7th chord creates a unique feeling of tension in a chord progression that is nicely resolved when it is followed by the chord based on the Ionian mode.

Extended Chords
Sometimes notes above the first octave of the scale are added to chords to give them a larger sound. Chords with these notes are called extended chords. Chords with extensions are named according to their highest scale degree, e.g., Cmaj13 (as in the example below).