This scale is a bit of a hybrid since its third note is minor and the seventh note is major. The tonic chord of this scale when extended to four notes is an unusual sounding chord called a minor-major-seventh. It has a rather ghostly sound to it. Because of this, the chord is often played as a minor triad. 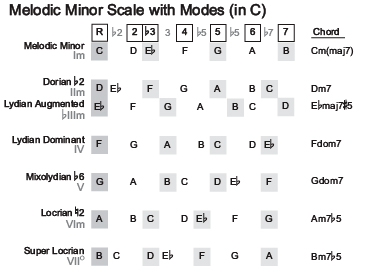 The chart above show important elements of the Melodic Minor scale. The scale and each of its modes are listed showing the scale degree of each note. Each mode is given its name and with its chord degree indicated. The highlighted note show the notes that make up the chords listed along the right side.