Harmonizing the diatonic scale produces chords with different sounds. These chords have different qualities which produce different effects when played in a piece of music. Though these chords offer a wide range of expression, musicians often want to add variety and surprise to their music. This is accomplished by substituting existing chords with ones that sound different but accomplish the same harmonic function. When the new chord belongs to the same key as the original chord, it is called a diatonic substitution.

Major and Minor
In the Common Chord Substitution section of the Harmonizer the one chord (I) of the major scale is found at the top of the column of chord roots. This chord is derived from the major key as appearing in the key designator of the Major and Natural Minor Scales section. Since the natural minor scale begins counting from the sixth note of the major scale, the chord that has this note as its root is the one chord (Im) of the minor scale relative to the major. Though they share the same chords, they perform different harmonic functions.

Name and Function
This column indicates the root of the chord, its chord name, and the theoretical name which describes the chord's harmonic function. Each of the seven chord degrees (I, II, III, etc.) performs a slightly different function in a piece of music. Knowing a chord's function is important when making chord substitutions.

The root note in the window combines with the suffixes to the right to spell out the name of the chord which is to be replaced. The theoretical names as presented in this section apply only to the chords of the diatonic major scale.

A chord's theoretical name indicates its relationship to the other chords of the key and gives musicians a way to talk about chords without being specific to a key.

A theoretical name is similar to the name given to a position on a baseball team, like pitcher, catcher, or outfielder, etc. The theoretical name describes what function the chord will play in a piece of music. Some chords create tension, some relaxation, while some create movement. While it is important to know all the positions a chord can play, the most popular chords in pop music are the tonic, subdominant, and dominant. In the key of C major these would be C, F, and G, respectively. 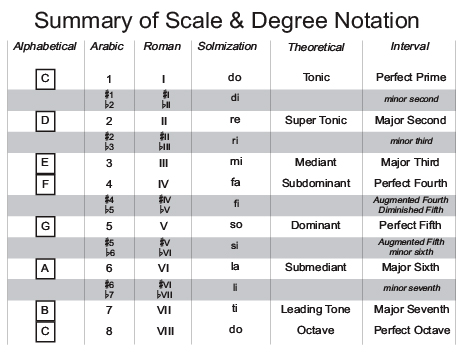 Chord Family Substitutions
It is helpful to know the functions of the chords in order to make successful chord substitutions. The diatonic structure consists of three families of chords: tonic, subdominant, and dominant. 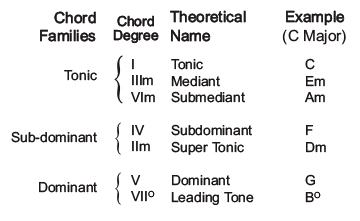 The diagram below shows the similarity between notes when chord families in the key of C major are grouped together. 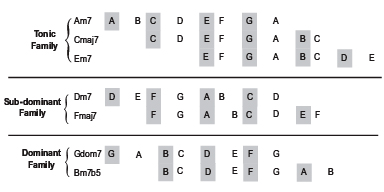 Inversions
Another kind of chord substitution is accomplished by rearranging the notes of a chord to produce a new chord. Below is an example of some of the chords in the key of C major that are inversions of each other and can usually be used interchangeably.

A tritone interval is actually a diminished fifth (or augmented fourth) interval. This interval is made up of three whole steps, thus the name tritone. This substitution works because these two chords resolve to the tonic chord in similar ways.

In the key of C the dominant chord is Gdom7. The flatted fifth of Gdom7 is Dbdom7, which becomes the substitute chord. The example below shows that the second and fourth notes of these two dominant chords resolve to the first and second notes of the tonic chord by descending or ascending one half-step.

Another reason this substitution works, even though it is not diatonic, is that the root of the substitute chord which creates harmonic tension descends one half-step to the root of the tonic, creating a descending chromatic bass line. The tritone interval of the original dominant chord and its flatted-fifth substitute allow the tension created by these chords to be released by the tonic chord.

Another interesting characteristic about the tritone interval is that two tritone intervals added together produce an octave. As in the example shown above, when we go up the scale three whole steps from F (the second note of Dbdom7), we land on Cb (the fourth note of Dbdom7). When we go down three steps from F, we land on Cb an octave lower than the fourth note of the chord. Since Cb and B are enharmonic equivalent notes, you can see that Dbdom7 and Gdom7 share the same tritone interval from F to B and from B to F.